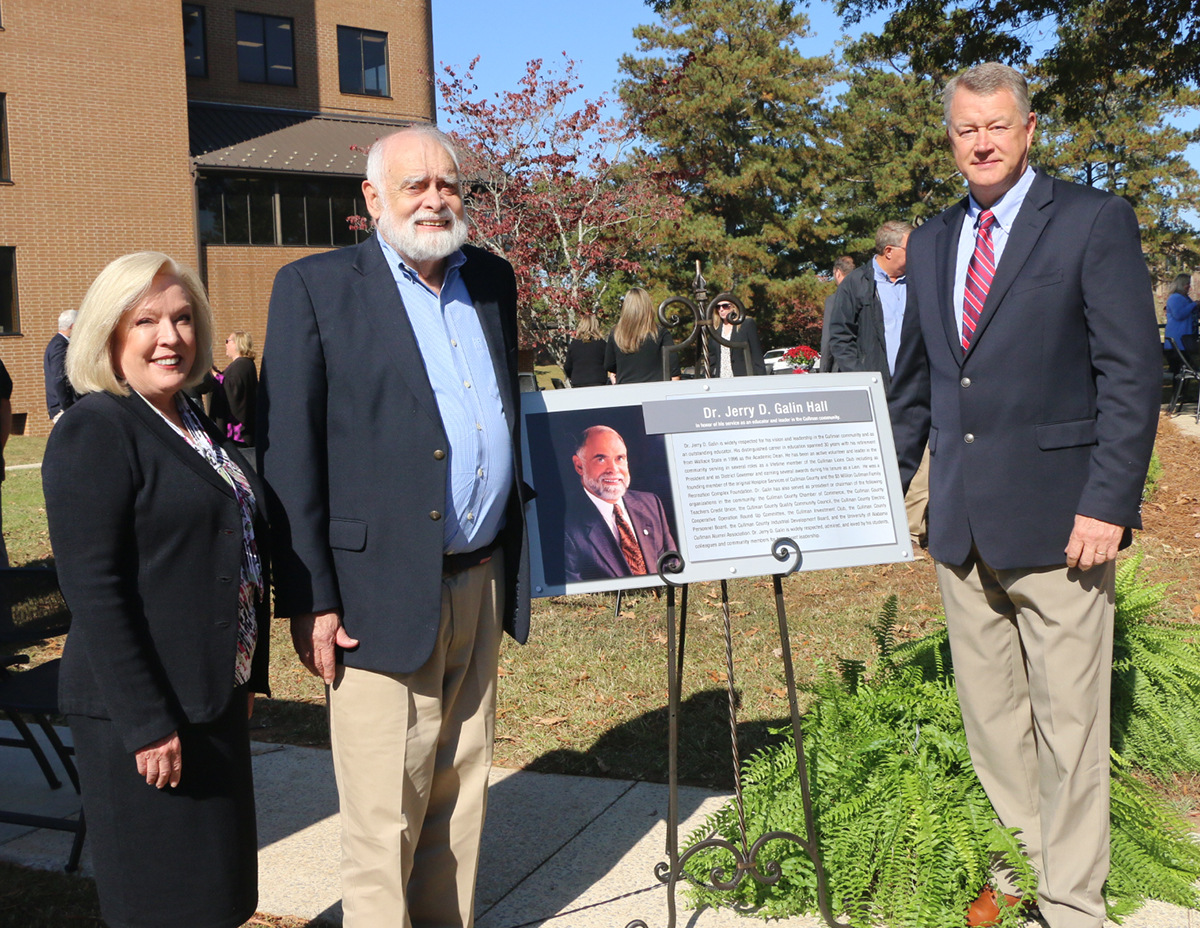 Hanceville, AL — Wallace State Community College announces the naming of its Business Education building as the Dr. Jerry D. Galin Hall, in honor of the longtime WSCC educator and administrator.

The opportunity to name the building was granted to the Cullman Savings Bank Foundation in appreciation for its commitment of $500,000 over the next 10 years to support Wallace State students via scholarships through the Wallace State Future Foundation.

“What better way to use these funds than do what Jerry dedicated his life to here at Wallace State,” said Riley, who has known Galin for more than 30 years as a friend and business partner. “So many students over so many years, people whose lives Jerry has positively influenced. I never got the chance to take one of Jerry’s classes, but I feel like I’ve been a student for over 30 years and I’m better because of it. I’m pleased to honor him in this way because I know what he’s done for our community. I see him do it every day, I know he’s going to do it in the future, and I appreciate him very much.” 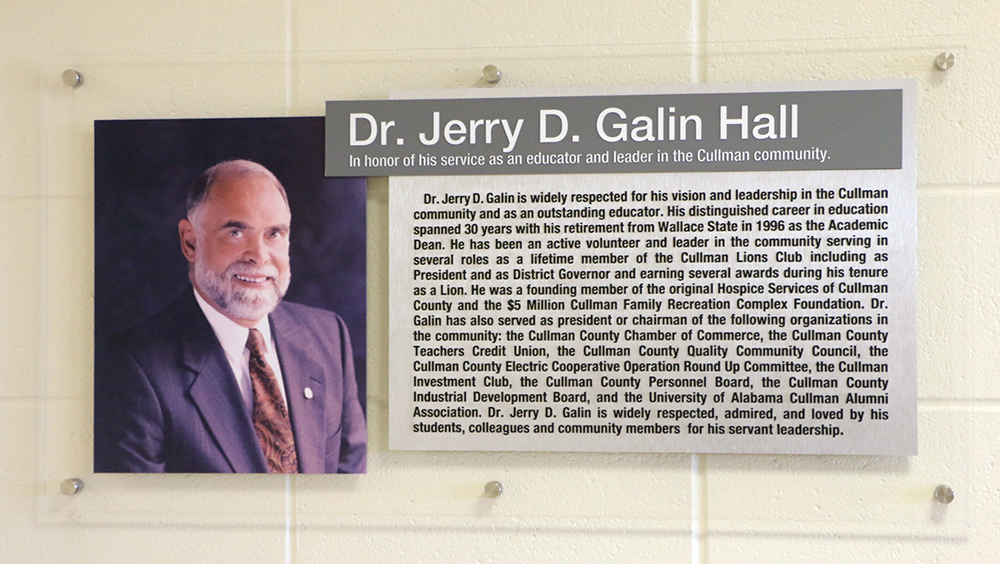 A sign installed inside Dr. Jerry Galin Hall, the Business Education building at Wallace State Community College, touts Dr. Galin's service and leadership not only to Wallace State but to the Cullman community at large.

Dale Greer, director of the Cullman Economic Development Agency, credits Galin as a major influence in his professional career and in his earning a degree.

“Jerry loved education, he loved teaching,” Greer said. “I was a college dropout at the time I met Jerry. He never said, ‘Dale, go back to school.’ But he continued to talk about the value of education and how important it was. He rarely missed a teaching moment. I have a degree today because of Jerry.”

Greer went on to tout Galin’s contributions in numerous civic and community organizations. “I think Jerry’s civic volunteer and benevolent contributions are every bit as remarkable as what he has done in the classroom,” Greer said. Among those contributions were his participation and leadership with the Cullman Lions Club, Cullman Family Recreation Park Foundation, Cullman County Industrial Development Foundation, Cullman Electric Cooperative Operation Roundup Board, and many more.

“You may not know that Jerry was the single largest fundraiser when we were raising money for the construction of Heritage Park,” Greer said of Galin’s personal contribution combined with his own fundraising efforts.

Galin started teaching at Wallace State in 1974 and retired in 1996. During his tenure, he served as the Chairperson of Management and Training, Dean of Faculty Development and Academic Dean.

“When I came to Wallace State there were 15 employees and 350 students,” Galin said. “Wallace State has grown in its service to the community. I’m honored to be recognized for there have been many great leaders over the years.

“I’m reminded of a story by Samuel Clemons/Mark Twain,” Galin added. “He once said if you’re ever walking down the road and you see a turtle on top of a fence post, you know it didn’t get there by itself. I need to thank my mentors, Charlie Glover and Chester Freeman, very successful businessmen, but they taught me along with that, you need to give back to the community.

Galin also expressed his appreciation to family and friends who attended the dedication of the naming of the building, along with Riley, the Cullman Savings Bank Foundation, the Wallace State Future Foundation, WSCC President Dr. Vicki Karolewics and the faculty and staff of Wallace State.

“I am indeed honored that the Cullman Savings Bank Foundation has chosen Wallace State Community College to honor your service,” Karolewics said. “We are honored that the recognition of your contributions to our community, but most importantly as an educator, are permanently remembered here in this space and hopefully will influence the lives of many future Wallace State business graduates who will become leaders in their communities just as you have been in ours,”

For more information about the Wallace State Future Foundation, visit www.wsccfuturefoundation.org or call 256.352.7808.