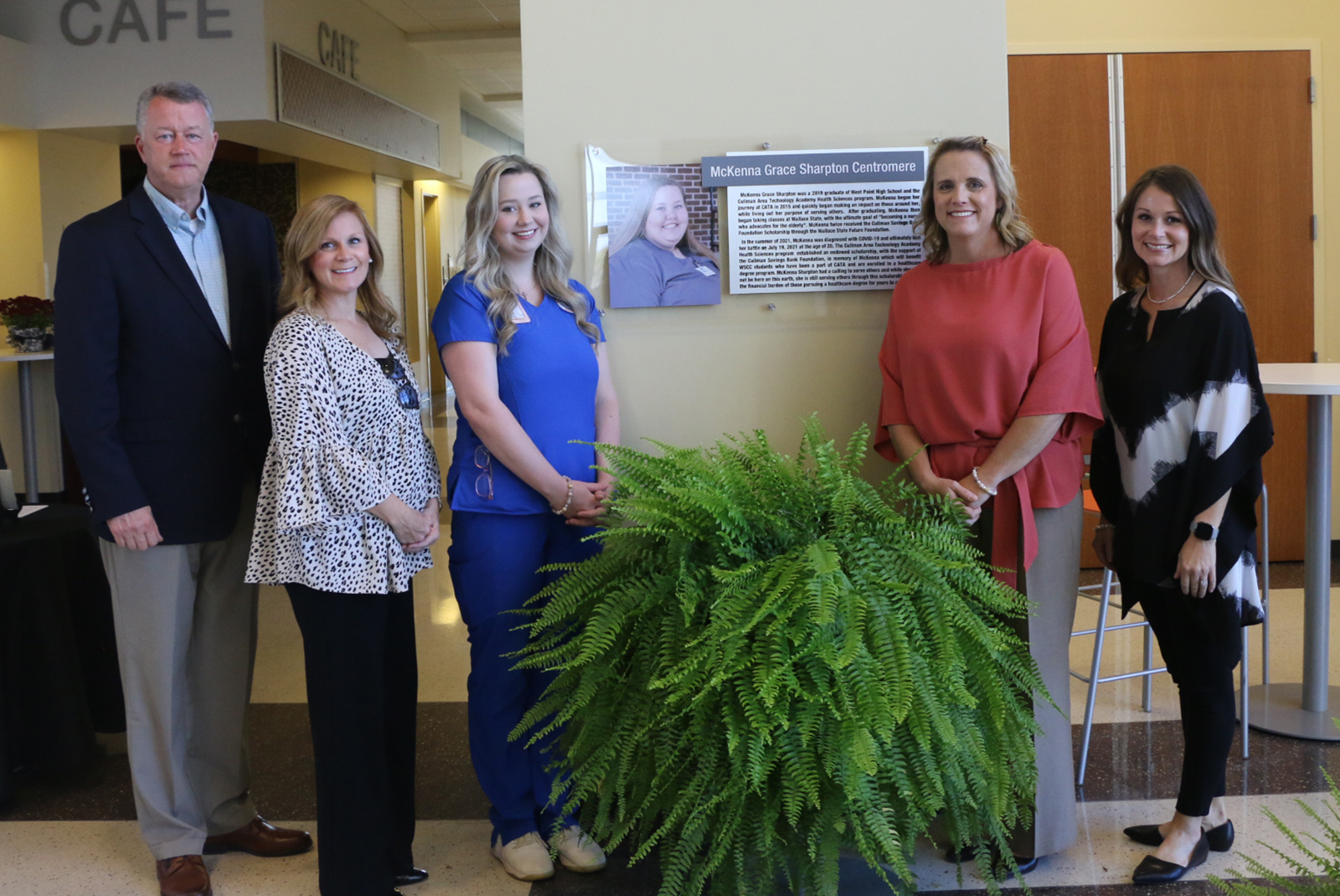 On hand for the dedication of the McKenna Grace Sharpton Centromere in the School of Nursing and Center for Science at Wallace State Community College were, from left, John Riley and T’aira Ugarkovich of Cullman Savings Bank; Emily Mathis, the first recipient of the McKenna Grace Sharpton Memorial Endowed Scholarship; and Cullman Area Technology Academy (CATA) instructors Tracy Smith and Adriann Basch.

Sharpton was a student of the Wallace State Department of Nursing Education who tragically passed away in 2021 at the age of 20 after battling COVID-19. A dedication was held recently, with members of her family in attendance.

The Cullman Area Technology Academy Health Science program, which Sharpton attended throughout high school, established the McKenna Grace Sharpton Memorial Endowed Scholarship, committing to raise $12,500 over the next four years, with that amount to be matched dollar for dollar through the U.S. Department of Education Strengthening Education Tittle III grant. 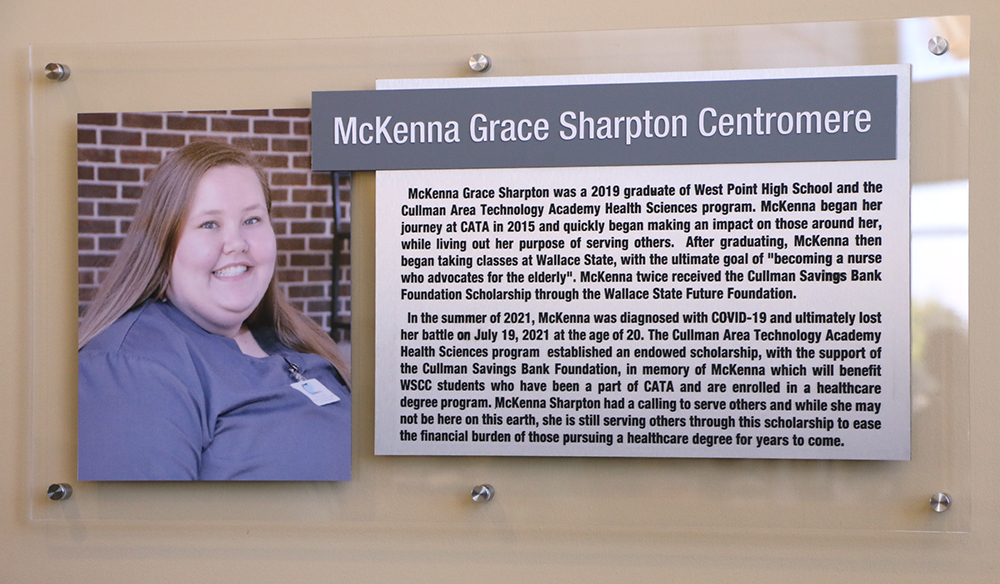 The opportunity to name the centromere was granted to the Cullman Savings Bank Foundation in appreciation for its commitment of $100,000 over the next 10 years to support Wallace State students via scholarships through the Wallace State Future Foundation.

Cullman Savings Bank President John Riley said Sharpton stood out among the hundreds of students he’s met over the years during interviews for scholarship applicants. He described her as humble, genuine and a person who exhibited pure love.

“She showed it to me as she spoke about other people, and she showed it to me as she talked about her grandmother and her grandmother’s friends and how they motivated her to become a geriatric nurse,” Riley said. “After the interview she got up and left my office and I turned to the other interviewers and said what a precious soul that is. And they all agreed with me that this was the kind of person that we were looking for, the kind of person we needed to help do whatever we could do because she was going to make a difference in lives.”

He went on to add that McKenna’s impact on those she encountered was like the ripples left by a pebble dropped into water. “The pebble never gets to see these ripples,” he said. “Talking with people she worked with, the people she studied with, I know that she positively affected many, many people. McKenna’s name, McKenna’s legacy will be on this building for a long, long time — as long as this building stands —but the ripples of McKenna’s love will go on forever. It’s been a blessing to have known her in my small way.”

“She was a remarkable young lady with a brilliant smile and giving spirit,” said Basch. “We cannot think of a better way to honor the life of McKenna. It is only fitting that in this beautifully bright, welcoming area her lovely name will be seen for all to see. McKenna was all of these things; she was always a light in this world. She was friendly, inviting and welcoming to everyone.”

“McKenna always put others before herself,” Smith said. “How fitting that this area is being dedicated in McKenna’s memory, an area where students will gather in preparation for that next big text or skills check off, or to have a quick break with friends between classes, and a place where tomorrow’s healthcare professionals will discuss for years to come the ever-changing industry and how COVID has affected it. All the while, McKenna will be here with us helping others through her scholarship.”

The first recipient is Emily Mathis, a fourth-semester nursing student at Wallace State, who had classes with Sharpton when she attended CATA. She’s thankful and honored to be chosen as its first recipient.

“McKenna was a great student and was one of the kindest people I ever met,” Mathis said. “I never saw her without a smile on her face and she worked so hard. She really loved nursing and she really loved taking care of people, so to get this award, it means a lot.”

Sharpton’s parents, Rhonda and Bobby Sharpton of Crane Hill, are proud of the recognition their daughter has received.

“It’s bittersweet for us, of course, but we were honored that our daughter had touched so many lives,” Rhonda Sharpton said.

During the dedication ceremony, Deborah “Pepper” Hoover, chair of the Department of Nursing Education, presented the Sharpton’s with the lamp their daughter would have received at her pinning ceremony. Her classmates also set aside a chair for her during their pinning ceremony in August.

Wallace State President Dr. Vicki Karolewics said, “We are honored that McKenna’s life will be permanently remembered here and hopefully influence the lives of thousands of future nurses who will graduate from Wallace State Community College and provide excellent nursing care for your families and friends.”

Donations to the McKenna Grace Sharpton Memorial Scholarship can be made at www.wsccfuturefoundation.org or call 256.352.7808 for more information. 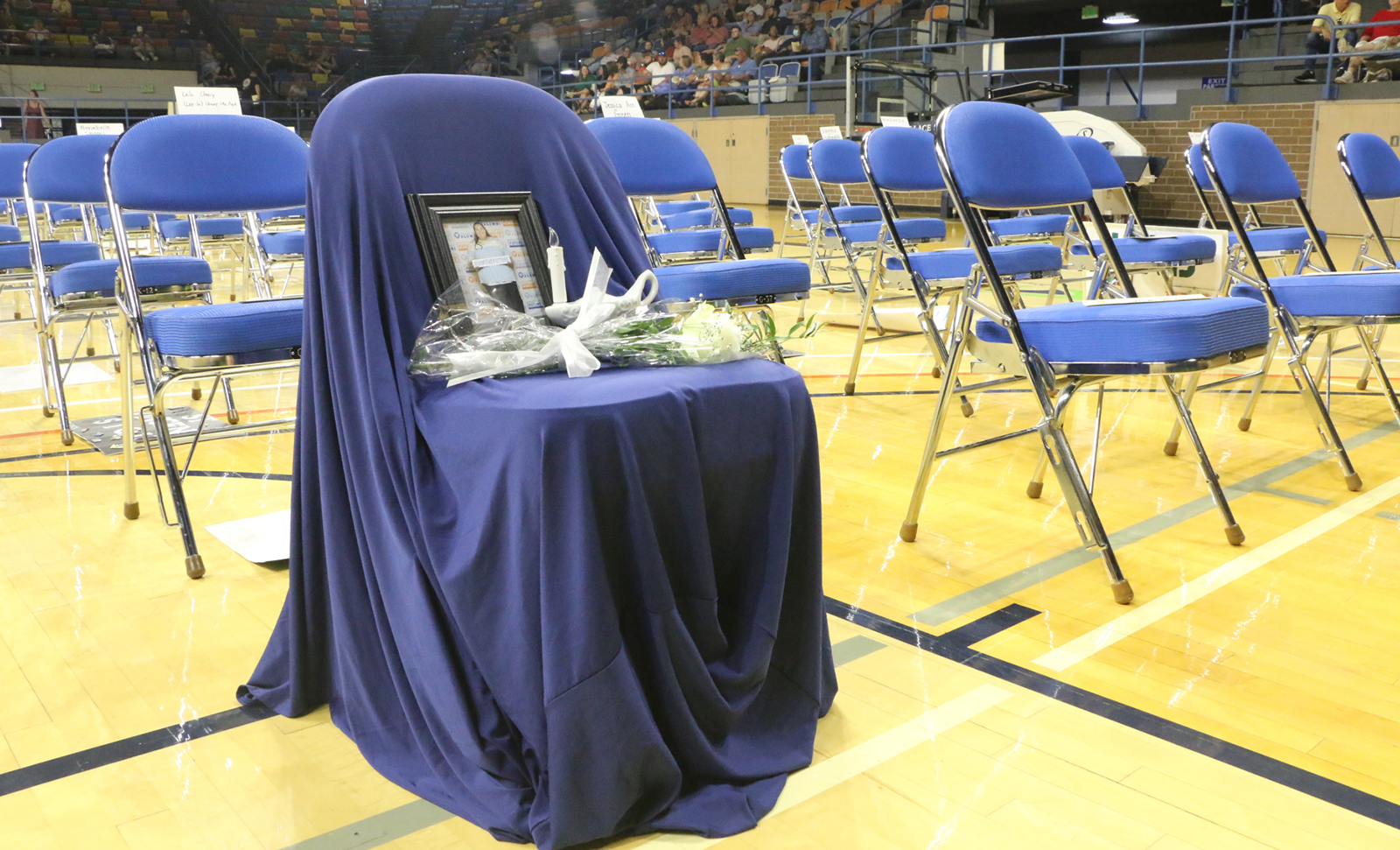 A chair was set aside at the August 2022 Nursing Pinning in memory of student McKenna Grace Sharpton.